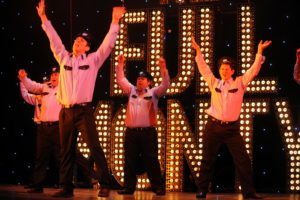 The first meeting to form Ipswich Amateur Operatic and Dramatic Society was called by Mr Douglas Mayhew in 1954. The following has been taken from an article written by Mr H Spruytenberg in February 1955 who, in addition to being a critic for the Evening Star, was the first President of the re-formed Ipswich Operatic & Dramatic Society. From here, history was born.

In a gentle and unobtrusive fashion history was made in Ipswich last week. When the curtain fell on the last scene of ‘A Country Girl’ in the Art Gallery, when the applause had subsided and the speeches and presentations made, it can be said that musical comedy (after a lapse of many years) had returned to the town!

There had been operatic societies in Ipswich in the early part of the century, Whaydos (Waterloo House Amateur Dramatic and Operatic Society) being one. Strangely, the Grandfather of one of IODS’ founding members, Margaret Morphew, was an active performer with Whaydos.

Disaster struck in 1957. The Society had signed a contract to present ‘Carousel’ at the Hippodrome Theatre. However, with the death of the owner Will Hammer, the theatre closed. Lady Luck smiled on the Society because, although the theatre had been closed for several months, it was re-opened for this final performance.

David Lowe, manager of ‘The Gaumont’ (now Ipswich Regent), contacted the Society and after many discussions managed to convince IODS to take an extraordinarily brave step to present the first amateur musical ‘Bless the Bride’ at the 1,000 seat theatre in 1958. There followed a fantastic relationship between theatre manager and the Society for many years.

Interestingly performers had just five microphones along the front of the stage at the early shows at ‘The Gaumont’, which tended to magnify the sound of feet and scenery shifting in addition to voices! Radio microphones were not used until the late 80s, and then only for principal solos.

IODS has presented most of the major Broadway and West End shows, some of them on more than one occasion. The sixties and early seventies brought great acclaim to the Society when they were chosen to perform four amateur premieres ‘West Side Story in 1963, ‘Camelot’ in 1967, ‘My Fair Lady’ in 1968 and ‘Fiddler on the Roof’ in 1973. What great times they were, when ‘House Full’ signs were put outside the theatre before the end of the week.

The early eighties was a difficult time for amateur operatic societies throughout the country. Massive increases in costs, coupled with a falling off of audiences, caused many Societies to flounder. IODS was no exception and for a time there was great concern about the future of a major society in the town. However, once again the members ‘came up trumps’ by instigating a sponsored fund raising event to enable the Society to present the next show. Each individual member set up their own sponsored activity, with all money gained passed to the funds.

These ranged from running jumble sales, putting on Olde Thyme Musicals, and many more, some very unusual – such as being sponsored for giving up puddings! The efforts of these members shouldn’t be forgotten – they enabled the Society to continue and grow from strength to strength.

In 1998 IODS won the coveted NODA Best Production Award in the Eastern Area for their production of ‘Crazy for You’, and again in 2001, 2003 and 2004 for ‘Sounds Familiar’, the Society’s autumn revue.

The 2002 production of ‘Evita’ was an East Anglia premiere.

IODS has had several Production Teams over the years, some involved with just one or two shows, others who have stayed with the Society for many years.

IODS has always supported local and national charities. For many years members performed at The Seven Rivers Cheshire Home, at Great Bromley and boxes at The Gaumont theatre were filled by residents of the Home at every Saturday matinee performance. Members of the cast would help them to their seats before the show and walk through the audience to greet them in costume after the performance. Concerts to raise funds for causes such as training and educating blind children in Malawi and other more local charities were (and still are) a regular item in the Society’s programme. The ‘Charity Concert’ page gives details of current endeavours.

Way back in 1966 the Society presented a ‘Midnight Showtime’ concert at The Gaumont in aid of the Aberfan Disaster Fund. A peep at the programme for the above event gives us names of people still actively involved in the amateur theatre in one capacity or another, and two who went on to make their name on television!

The amateur theatre world was going through enormous financial difficulties in the late seventies. IODS was no different. To help provide urgent funds in order to continue producing high quality shows, the Society decided to present a review at Chantry School in Ipswich, and Sounds Familiar was born!